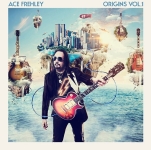 If it wasn’t for Ace Frehley and 70s KISS I probably never would’ve ended up listening to Hard Rock and Heavy Metal at all! This, and the fact that there’s countless of bands out there nowadays (even in the Black and Death Metal genre) that name the original fearsome foursome and especially Ace Frehley’s unique playing style a massive influence, definitely justifies a mention of Ace’s new album here, I guess. On "Origins Vol.1" the former KISS guitar player is paying tribute to his own influences and has covered a lot of the usual suspects from the 70s (CREAM, THE ROLLING STONES, JIMI HENDRIX, FREE, LED ZEPPELIN, THE KINGS, STEPPENWOLF etc.). Three old KISS songs made it onto the record as well (‘Parasite’, ‘Cold Gin’ and ‘Rock And Roll Hell’) of which ‘Rock And Roll Hell’ is probably the most unexpected of the bunch, since it was written by Gene Simmons and Jim Vallance… and the relationship between Ace and Gene wasn’t always that friendly as some of you may know. On the other hand it’s just fantastic to finally hear ‘Parasite’ and ‘Cold Gin’ (two alltime KISS classics that were written by Ace) with the man himself on lead vocals (‘Cold Gin’ also got a completely new guitar solo!). This is without a doubt, the ultimate way those songs always should’ve been performed! The other songs on the album pretty much vary in quality and excitement. CREAM’s ‘White Room’ and FREE’s ‘Fire And Water’ (the latter surprisingly with Paul Stanley on lead vocals) turned out a little boring to me, and in my opinion the superfluous ‘Wild Thing’ (a duet with Lita Ford here) shouldn’t have been included at all anyway, because it has already been covered and played to death over the years by various other musicians. On the positive side we have ‘Street Fighting Man’ (originally by THE ROLLING STONES), which fits Ace just perfectly, ‘Bring It On Home’ (LED ZEPPELIN) – with very cool, Robert Plant – like lead vocals from drummer Scot Coogan, and to me the biggest surprise, ‘Emerald’ by THIN LIZZY (feat. Slash on additional guitars). I never really expected Ace to be a THIN LIZZY fan, but his version just smokes. Listening to solo albums by Mr. Frehley is always a real pleasure to me anyway and reflect how much his contribution to modern KISS is missing these days. It was this diversity, that made the 70s KISS albums so much better. Ace may not be the best vocalist in the world, but his voice is definitely one of the coolest we have in the entire Rock music genre! He’s just totally unique and you will always recognize him among zillions of other singers. So, to sum it up: "Origins Vol.1" is just what it’s supposed to be – a record that sounds like a lot of fun, and that isn’t meant to be analyzed for its musical skills, highly innovative ideas or something like that! And it comes up with a great cover art for sure! I’m already looking forward to volume 2, because as you probably know: the man always had an ace in his deck! More info at www.acefrehley.com, www.facebook.com/officialacefrehley, www.spv.de