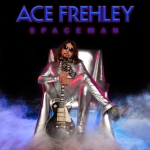 Whenever original KISS guitar player Ace Frehley releases a new solo album, I immediately notice what I do miss on all of the KISS records without him. Ace might not be the best singer in the world of Rock music and not all of his songs are killers, but it has always been the diversity of the four original KISS members that made older band albums so fascinating, even after so many years. Each one of them brought a uniqueness to the table that, in combination, defined a perfect KISS album. Ever since Ace released albums on his own, it became pretty obvious though why several of his songs were refused by KISS founding members Paul Stanley and Gene Simmons. The hurting truth is: some of them are simply average. But the same can easily be said about a lot of the songs that Gene Simmons contributed and that still ended up on KISS albums anyway. Go figure why… "Spaceman" is already the eighth full length from Ace (excluding "Live + 1" and the "12 Picks" and "Loaded Deck" compilations) and if you enjoyed his previous work, you’re definitely gonna enjoy this one as well. It is typical Ace Frehley from start to finish! His voice is so unique that you’ll recognize an Ace Frehley song within seconds. And in his guitar work, even though it is far from being perfect (yet being worshipped by millions of KISS fans around the world), he still manages to come up with riffs and solos that always recall his musical past. Is it intentional or just a lack of his own creativity? I don’t know. But I like it nevertheless, because I always hear something in his songs that immediately reminds me of an old KISS classic for one reason or another. So, what does "Spaceman has on offer then, apart from a fitting album title and cool cover photo? Well, an easy way to finish this review rather quickly would be to say, eight typical Ace Frehley songs plus another instrumental (‘Quantum Flux’). Love it or hate it, you’ll be the judge. But I’ll give you a little bit more info anyway. ‘Your Wish Is My Command’ and the album opener ‘Without You I’m Nothing’, that both were co-written by his old KISS partner Gene Simmons (who also played bass on the latter), aren’t really standout tracks on the album to me and confirm my opinion that Simmons’ songwriting qualities haven’t really been the best for quite some years now. But luckily there’s also some pretty cool tracks on the album, like ‘Rockin’ With The Boys’, a great sing-a-long tune that lyrically seems to follow the footsteps of the 1976 KISS ballad ‘Beth’, or ‘Bronx Boy’, which previously was already released as a single. That is definitely Ace Frehley at his best since it features all trademarks we love about Ace so much: cool vocals, a simple yet catchy chorus and a smoking guitar solo in typical classic Ace fashion. Same goes for the following ‘Pursuit Of Rock-N-Roll’ in which Ace sings about his musical influences or ‘I Wanna Go Back’, in which he lyrically seems to regret certain things of his past and that he would do differently today if he would have the chance to. ‘Mission To Mars’ is another smoking standout Rocker while ‘Off My Back’ is Ace in all his coolness again. As already mentioned, the album closes in typical Ace Frehley fashion with ‘Quantom Flux’, which is another fine instrumental, not reaching the qualities of ‘Fractured Mirror’ from his 1978 first solo album though (but that is almost impossible anyway). It still comes up with some great accoustic pieces and a nice overall melody line. So, to sum it up: "Spaceman" is a solid new album from Ace, not groundbreaking, but definitely not disappointing either! More info at www.facebook.com/officialacefrehley, www.spv.de