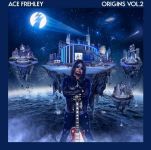 After the former KISS band member had already covered his utmost favorite songs on “Origins Vol.1”, it seemed only a logical consequence that “Origins Vol.2” would follow. This time too, Ace Frehley a.k.a The Spaceman or Space Ace, ventured to play his favorite Rock songs and brought several music colleagues and old friends on board to support him. After giving the album a full-on listen from start to finish, the first noticeable thing is that Ace nowhere really tried to impose anything on all those revered titles. It just felt like he had a great time with all those veterans, let it happen and things develop by themselves, but meticulously showed his spontaneity on guitar solos and also incorporated fresh ideas without overdoing it. You will feel that these are not empty words in the opener ‘Good Times, Bad Times’. The LED ZEPPELIN classic doesn’t seem to be covered far from the original, also the same can be said about ‘Space Truckin’ by DEEP PURPLE (a natural choice for The Spaceman) or THE KINKS ‘Lola’, where their essence was kept intact, but soaked with the signature of The Spaceman. Unlike “Origins Vol.1”, the production here seems powerful and any inclined listener would experience that. The basses are powerful and full, the riffs not overdriven and the vocals clear and energetic. These will be evident especially in ‘Manic Depression’, a JIMI HENDRIX cover. Here, the guitarist not only made a mini KISS reunion with Bruce Kulick but also makes a solid figure as a singer, without trying to change the intensity of the original. In view of the 50th anniversary of the guitar legend’s death on September 18, 2020, this track is an excellent ode from Ace. One of the most enjoyable tracks is the cover of THE BEATLES ‘I’m Down’, where Ace and guitarist John 5 (MARYLIN MANSON) go off on wild solo runs with all the energy and exuberance of a teenage garage band. John 5 also showed that charisma on the CREAM cover ‘Politician’. On the other hand, Lita Ford, brings her still-on-rolling vocal skills in the THE ROLLING STONES cover ‘Jumpin’ Jack Flash’. Approaching the touch line with ‘We Gotta Get Out Of This Place’, Ace adores Eric Burdon from THE ANIMALS and at the end, he got back to his roots, with ‘She’ (as a bonus track here) and delivered a high-quality replica of the KISS song from the “Dressed To Kill” album. A worthy closer for the album. You can think of cover albums whatever you like, demonize them and dismiss them as unnecessary, but legends like Ace Frehley are always allowed to do that, as he belongs to that golden epoch. Also, for those never unaware, “Origins Vol.2” provides an interesting mixture of the best hits from the 1970s Rock legends and for me, it’s a good example that these evergreens can last forever. Explore more about the release and label here: www.acefrehley.com, www.entertainmentone.com, www.spv.de.