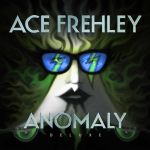 Alrighty, Ace Frehley and KISS fans. In the course of the success of Ace’s latest solo album "Space Invader" and the cover album "Origins Vol. 1", Steamhammer / SPV are keeping the engine running with a nice re-release of the 2009 comeback album "Anomaly". Just in case, you didn’t buy it back then you can go and grab it now, as remastered version and with 3 unreleased bonus tracks: ‘Hard For Me’, which became ‘Foxy & Free’ later, ‘Pain In The Neck’ in a slower version instead of the final one who made it on "Anomaly" and last but not least the instrumental ‘The Return Of Space Bear’ (only available as download until now). Nice to have. But not a must have for those who bought the album back in 2009, originally released in Europe by Season Of Mist in a supercool pyramid folder carton box package. Very psychedelic indeed. Steamhammer / SPV are offering their re-release CD in a standard digipak with extended artwork, liner notes by Ron Albanese and additional track by track comments by Ace himself (or as a double picture disc vinyl). Compared to KISS’s "Sonic Boom" (released in the same year), "Anomaly" is much closer to the original 70s sound of KISS. Superb tunes like ‘Foxy & Free’, ‘Outer Space’ incl. a heavy 7-string drop-d tuned rhythm guitar, ‘Pain In The Neck’, ‘Genghis Khan’, ‘Too Many Faces’ and ‘Sister’ should easily appeal to many KISS and generally Hard Rock fans. Autobiographical songs like ‘Change The World’, ‘A Little Below The Angels’ and ‘It’s A Great Life’ are dealing with Ace’s "getting sober and rid of drugs" days. In the beginning they might sound a bit greasy. But "The Spaceman" has lots of experience to share with the world. So why not broaching the drug issue in these songs and supporting the rehabilitation process. Yup, self-healing effects are important, kids. And of course there are the instrumental songs as well. Like ‘Space Bear’ and ‘Fractured Quantum’. Typically Ace Frehley, if you ask me. Showing, why he was such a big influence on so many kids in the 70s, who became big names in the 80s and 90s. Ace has developed his signature guitar tone over the years, which makes him one of the top guitar heroes of all time. That’s for sure. On the other hand, too bad that drug issues over many many years hold him back much too often, unfortunately. Oops, I almost forgot to mention the totally unnecessary cover version of ‘Fox On The Run’ (originally by THE SWEET). I will never understand, why Ace is constantly recording cover tunes? Maybe he wants to recap his 1978 single hit with HELLO’s ‘New York Groove’? Only Ace does know. Anyway. "Anomaly" is a very good Hard Rock album worth having in your record collection. I’m still listen to it after all these years and appreciate it much more than "Sonic Boom" by KISS. For all new "Anomaly" customer, this "deluxe" version is a good bridge over until Ace’s next solo album. Check it out, now! For all further information check out: www.acefrehley.com, www.facebook.com/officialacefrehley, www.spv.de