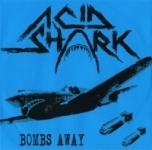 Straight out of Bristol, England we have ACID SHARK that delivers a fierce Crusty Punky Grindcore attack. "Bombs Away" is the band’s first release, and the 3 tracker does show some potential within the aggressive and direct niche. ACID SHARK doesn’t bring that much new to the table, they are treading good old paths, but deliver their music and message in a good and direct manner. We have some good dirty and very catching guitar riffs, a bass that more or less follows the noisy guitar and some frantic drumming, blasting away and making good breaks when needed. The raw punky vocals fits the musical universe of ACID SHARK well and compliments the output, so it’s quite a shame that Matteo has left the band since the recording of this demo, but that means you have a chance at the mic, if you can handle the task! At the start I wasn’t very impressed with what hit me, when this release was blasting from my speakers, though within a little week the release has grown on me, quite much indeed, "Bombs Away" is a catchy little bastard with some good hooks and I sincerely hope that the band will come up with a good singer and soon release some more havoc. More info at: www.acidshark.co.uk