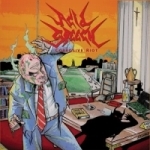 I sometimes think that this Thrash Metal revival sometimes is not that good. Over saturated, pro-tools enhanced and sometimes very dull. Very few bands are doing something that really stands apart from the millions of releases that just re-hash the riffs, lyrical themes and image of what was once done 20 years or so ago. I don’t mind a good clone band, but to these ears, I can tell if there is soul or not in making metal. Enter Brazil’s ACID SPEECH. While their name recalls a more Hardcore orientated band, this is a straight in your face Thrash Metal band with a tiny bit Trashcore touches. It reminds me of Bay Area Thrash bands like DEFIANCE, TESTAMENT and touches of D.R.I. and early CORROSION OF CONFORMITY. This is actually their debut demo, which possesses a strong guitar sound, with a somewhat poor snare drums sound, but still above average. ‘Corrosive Riot’ is one of the songs that stands out, particularly that this one sounds a bit different with a more KREATOR-esque approach rather than the more Bay Area sound of the other tracks. After a few more listenings, the band is quite competent and there are some good riffs here and there, but still the way they recorded the snare drum is keeping me from enjoying this one a bit more. While not a second rate retro Thrash band, this is still not up there and there is still a chance that with newer stuff they can make it to greater leagues. Still, I just cannot help to think most of these bands have no damn soul at all… like a good tasting non-alcohol beer; it is still not a true beer. www.myspace.com/acidspeech, http://adp.areadeath.net/