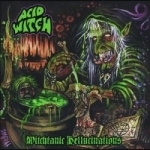 What makes a literary genre like Steampunk so interesting is it tries to predict what the world would have been like had the library of Alexandria not been set aflame, or how Medieval and Renaissance cultures would have adapted to the advances in technology we have today. Its tremendously good fun, and that is precisely why ACID WITCH are so good. They are what a traditional late 70s Metal band would have sounded like had the band been privy to hearing music that succeeded it by twelve or so years. If it had heard Death Metal, Stoner Rock, Swedish melody, and seen the theatrics of a band like GWAR, they would probably end up sounding like this.They are a Steampunked Heavy Rock band. CATHEDRAL could learn a thing or two from them. This is awesome. Its trippy, brutal, heavy, and relaxing all in one. Evil has no boundaries, as SLAYER and Fenriz are always quick to remind us. “Witchtanic Hellucinations” is EVIL, though most definitely not the sort of evil audiences today are conditioned to look for. Buy it, and support Razorback. www.myspace.com/acidwitch, www.razorbackrecords.com