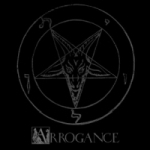 This Danish band (formed in 1996, with band members that are also active playing in many other bands) has finally unleashed their last attack upon mankind. Or at least that is what the band states in their official myspace page. I do not know the reasons behind this sudden death, as this is only their second full length, and to be honest they are not exactly that kind of cult band or something like that. This CD (and soon to be vinyl) consists of an aggressive and very fast Black Metal, which draws inspiration from bands like early BATHORY, early MARDUK, MAYHEM and WATAIN. So, it is not exactly a grim Black Metal release, it does possess some brutal Death Metal parts mixed within. There is certainly a very macabre atmosphere these four demons are able to conjure. And the recording is just the right one for this kind of music, not that polished yet not that demo sounding. I think they just hit the nail with the sound, if just maybe for my taste the drum sound could be better. After many listens to the album, this one starts to grow, yet not in the same level as let’s say WATAIN which does a similar style. Yet, it is more interesting than those “grim” Black Metal bands which are just mere clones of early DARKTHRONE. Although most of the songs have a similar structure, there is one that over shines here. It is the very last song ‘Modtag Skyggen’ which if this was any indication where the band was heading, they were up to greater things. This shows a more complex side of the band, with better arrangements, more work on the guitar, with punishing drums and yet still maintaining their style of macabre and fast Black Metal. Another example is in ‘The Necessity Of Slavery’ which starts with a very MORBID ANGELesque structure. The vocals do remind me to the first MARDUK releases. Yes, again this is one of those releases that grows a bit each time you listen to it. In the end this might not be the best upon similar ones, but it does possess a couple of great songs and riffs worth to headbang and invoke the dark one. Whatever that is. www.myspace.com/adnoctumdenmark, www.undercover-records.de