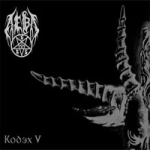 Sometimes we all realize how times goes by and reviewing the sixth album from this North German Black Metal horde makes me think about ordering their demo “Im Schattenreich” over ten years ago. A lot of things had changed in AEBA’s warcamp: two keyboarder left the band and finally they are working completely without any keys which changed the face of AEBA’s Black Metal to a certain degree. Due to the fact that also the guitars played and play a vital part in their creations the loss of the keys isn’t too severe but nevertheless noticeable. With their last release “Shemhamforash ” the band chooses to add more high speed parts in their music and on the other hand reduces the melodic keyboard parts, an action which has been furthermore increased on “Kodex V”. The 11 songs are all played well but songs like ‘Lifecode Sin’ could be played by so many bands from all over the world that it seems that AEBA lost track of the little branch they owned over the last years. Don’t take me wrong but as a fan of this band I’m quite disappointed because “Kodex V” is furthermore a Black Metal release where all essential parts / ingredients can be found but we all can advise at least 100 releases where this status is applicable. Will open a bottle of wine and listen to “Rebellion” (AEBA’s 3rd album) to remember the good fucking times. www.aeba.de, www.twilight-mailorder.de