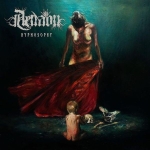 Greek Metal is always a little difficult to pinpoint. You have the pure Black Metal of RAVENCULT mixed with the ever-changing ROTTING CHRIST. But with AENAON, it’s sort of a head-scratcher. The third full-length "Hypnosophy" works its way through multiple paths which confuses the hell out of me which direction they may or may not be choosing. The opening track ‘Oneirodynia’ begins with an acoustic guitar which soon blasts into a chorus-like triumphant vocal, then growling vocals, then… horns. Yes, horns. For those unfamiliar with AENAON, there are horns mixed in their Metal. Ihsahn can get away with it. But not so sure about this band. Now, I do give them credit for having their own sound. But my question is… Is there enough of an audience to appreciate the diversity? ‘Fire Walk With Me’ continues with the horns and galloping guitars. I’m unsure if the title refers to the Twin Peaks movie or not. ‘Earth Tomb’ throbs into a mid-paced song containing the expected horns and progressive elements. ‘Void’ actually sounds like a void, with a dreamy guitar / horn combo and female vocals which actually soothes the soul. The fifth track ‘Tunnel’ blazes into a moshfest with its rampant riffs and throaty vocals. ‘Thus Ocean Swells’ is a meandering number that reminds me of drowning in an underwater paradise. The album closer ‘Phronesis – Psychomagic’ winds its snakelike body down a different path which continues to lack direction within the album as a whole. Individually, each track has its own character. But as a consistent album? Not so much. Credit where credit is due… AENAON at least are attempting something new for the Metal community. And hopefully they will find their niche somewhere in-between Progressive Metal and… something. For more information, check out www.facebook.com/aenaonofficial, www.code666.net