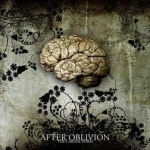 AFTER OBLIVION / NO BLEST
The Carnal Form / Age Of Catastrophe
(self-financed)
33:35min

AFTER OBLIVION hail from Bosnia, and you would never know that, as they sound wickedly identical to that of SACRIFICE from Canada! During the "Soldier Of Misfortune" era, and for those without their copy of that particular CD, you’ll thus be reminded of that particular disc as being laden with well played, technical Thrash / Death Metal circa 1990. So it is then, that "The Carnal Form ", the aptly titled A-side of this split demo is so eerily reminiscent of SACRIFICE during those times. So much so that even Rob Urbinati would have to "second guess" this 4 song sampler, as possibly being some left-overs of his from those sessions, that he may of forgotten about. That is no joke. And make no mistake these four songs; ‘The Carnal Form’, ‘For The Rebels’, ‘Learning To Despise’ and ‘Stamina’, absolutely stand up to any track on that album note for note, scream for scream. No small feat for any group of players. Couple all of that with such a superbly polished recording, it’s really amazing how factually close these players from Bosnia have struck in their overall approach to mark SACRIFICE. Anyhow – the downfall of this is that "Soldiers Of Misfortune" was in fact already released as you know, and for the sake of SACRIFICE the specific songs, that material in question has been wrought, tread upon and toured over. Granted that I like the flawless effort these Bosnians have attributed themselves too, and for the sake of taste, they could of picked a much lesser band to emulate. So I am very thankful that they chose a Thrash band instead of the numerous god forsaken ’90s Black Metal acts I constantly have to review every day! But the truth of this review is that either consciously or unconsciously AFTER OBLIVION strove very hard in their first attempt to sound just like SACRIFICE. That does not earn them any points for originality yet it does show me that even though originality might not be their strong suit, AFTER OBLIVION can play, and they know how to write and they also know their way around a recording studio. The next logical step for them is to break through this mold or form they have created here, move away from the apparent SACRIFICE stigma and instead become one hell of a steamroller of a Thrash band that sound wholly all their own. Contact: afteroblivion@yahoo.com or www.afteroblivion.com or www.hiddenthrone.info. Next up is the act NO BLEST (NO BLESSED?) from Brazil, "Age Of Catastrophe" is the B-side to this CD demo split and as well the first time I have ever heard of this band. In the tradition of U/G, brutal, technical Death Metal most attributed to those from within the Southern hemisphere, NO BLEST easily stand firm with their country’s counterparts, KRISIUN and HEADHUNTER D.C., featuring some of the most readily accepted and memorable early to mid’ 90s styled Death Metal you could hope to want to hear. NO BLEST specialize in crushing blast sections, suture ripping rhythms, finely executed lead work, and ultimate song writing capabilities; the level of which is to the point of acute professionalism. Why this band is not signed to a major label is beyond me, or for the sake of argument not even signed to a rising force, like John MCEntee’s Ibex Moon Records is a serious discredit to this band’s existence. NO BLEST kill! Track list is as follows: ‘PsyOp’, ‘Insanity In The Death Hall’, ‘Self Serving Mythology’, ‘Suffer By Infernal Pleasures’, ‘Black Soul Desert’ and ‘Unforgivable Suicide’. Contact: www.no-blest.com or www.myspace.com/noblestband or Carlos A. Franco, Avenida Herval, n° 387, ap. 4, CEP: 87013-110 Maringá-Pr-Brasil or noblestband@gmail.com or noblest@gmail.com