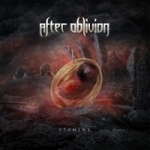 Now here’s something killer and worth each of our time, I believe. Progressive and technical Death Metallers AFTER OBLIVION from Bosnia and Herzegovina, is a totally new band for me – and oh dear, these four lads truly prove to be quite talented wankers with their instruments, and to play together as a tight sounding unit even. Yes, yes, yes and one more time yes… I can see many of you referring AFTER OBLIVION musically to the true forefathers of Death Metal, DEATH – and especially the band’s "Human" era in particular. Indeed. The (un-)holy ghost of DEATH’s "Human" era is undoubtedly a big part of these skilled fellows’ whole soundscape on their full-length studio release, titled "Stamina". For me, DEATH’s "Human" has always been a very important DEATH release (even if not their best though), so listening to AFTER OBLIVION’s "Stamina" obviously has this effect to push our minds toward the "Human" era of Chuck’s legacy. The musicianship of AFTER OBLIVION is on a top-notch level – there’s just no question about that, and I am sure Chuck is smiling warmly and widely somewhere now as he surely knows he has left something worth cherished for, for the whole world of Metal music. Vocalist and guitarist Adnan Hatic also does resemble quite strongly Chuck’s voice, with his dry and snarly vocal lines, that surely add even more of an impression to AFTER OBLIVION that they are about to become your very favorite tribute band to DEATH. Both bass and drums are well on a par with both the guitars and vocals on this release, so the production values have carefully been taken care of, too. Even if DEATH is that band that will surely get linked to AFTER OBLIVION constantly and most likely forever, I would also pick up American progressive Thrashers VEKTOR as a tiny but somewhat fair musical reference to them – and especially the band’s debut album "Black Future". Some similarities are definitely there, although at this point I cannot say they would hardly ever obtain as a hyper-technical and tricky musical direction compared to VEKTOR’s. I am sure they are relatively happy how they sound as a band these days; without even fearing to get "a pure DEATH rip-off act" stamp all over them. What "Stamina" is mostly all about, it’s a deep and sincere bow to the direction of one of the best Metal musicians ever, Chuck Schuldiner. AFTER OBLIVION let their Metal flow effortlessly, beautifully yet shamelessly on "Stamina", just the way as Chuck would have hoped them to do. And please don’t hesitate to check them out; AFTER OBLIVION are meant to give us some nice and unforgettable chills, in the name of well-executed Metal, of course! To contact the band, go to: www.facebook.com/afteroblivion, label: www.metal-on-metal.com