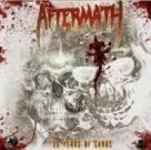 There was a time when it wasn’t seen as a good thing to release demos, rehearsals, lives etc as an official release by the bands considering all mattered was to get a real album out. Times have changed considering that a bunch of bands from back in the day who never managed to sign that ‘crucial’ deal now get releases out featuring those recordings often described as ‘amateurish’, ‘not well produced’ etc etc and band members are often happy to have at least this type of products out. In AFTERMATH’s case, it’s a bit different, the band did manage to get that deal BUT it was too late and when their debut album was released, the original attention given to that Illinois bunch had disappeared for quite some time. Now China’s own Area Death label have offered a deal to long time mainman / vocalist, Kyriakos "Charlie" Tsiolis, and as a result we’ve gotten a very cool box which really covers in this case the entire career of this once promising underground Speed / Thrash Metal band. Just imagine: three CDs full of music starting with their debut demo from 1986 when the band was nothing but full speed ahead with Hardcore overtones, the legendary fuckin’ fast "Killing The Future" tape (which opened many doors to the band and brought ’em a deal to appear on the "Screams Your Brains Out" album), the ’89 demo where the band had considerably slowed down and explored many new musical horizons, the 1990 demo done exclusively for Roadrunner (but in the end it didn’t bring any contract in return) that showcased some real impressive off the wall technical Thrash Metal in the league of OBLIVEON, CYNIC etc but without the grunts – Charlie belonged to the old category of Thrash Metal singers where you could distinguish the lyrics and where melody wasn’t a bad word! There’s another CD with the "Eyes Of Tomorrow" album plus their very last demo from 1996 where the band had – just like so many others – incorporated some of the sounds of the time but it’s nowhere as disgusting as let’s say "Green" or "Renewal" were. Surprisingly enough AFTERMATH had managed to keep their previous approach and had just added some of the elements around. Actually ‘Japan’ sounds really enjoyable in particular! CD # 3 contains three live shows, their very first one plus two shows from 1988, very cool because some songs that are on them never got captured in studio. The fourth and last disc is a DVD and the idea to put it together was REAL cool I have to say because it showcases the entire AFTERMATH story from a visual aspect as it starts with some very first rehearsal recording taped on 10/31/85 and it ends with a meeting with some band members captured on… 10/31/10! Cool, isn’t it?! FOR SURE IT IS!!!! In between you have stuff captured between 1985 and 2010, taken from a bunch of shows that I’ve never thought existed on video so when I claim that you can’t get a better box than this when it comes to AFTERMATH, that’s for a reason. As a bonus you have a cool poster, archives featured in the booklets (too bad the booklet from the second DCD is so thin though… there was definitively some more stuff that could have been included on it) and cool layout. It’s definitively your chance to experience what AFTERMATH was about and to hear the incredible – successful in this case – musical progression that this bunch went through. Recommended! More information at www.myspace.com/aftermathchicago, http://adp.areadeath.net