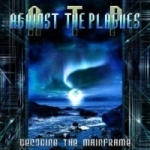 AGAINST THE PLAGUES
Decoding The Mainframe
(Vic Records)
44:40min

This is (still) a great album! Swedish AGAINST THE PLAGUE spawns their 2010 album “Decoding The Mainframe”. Their debut from 2007 “The Architecture Of Oppression” for some bizarre reason had to be released by the band itself, because most established were too ignorant to pick these guys up and preferred to invest in all sorts of superfluous records. This time the mighty Vic Records proove to be the wisest and took care of the project, so actually this is a re-release but under a different monicker. Some tracks are featured in completely new versions and I hope this pays off for both parties because the result is (still) of fabulous quality and it simply blows away the competition! Everybody who missed them back then, here we go! I can be short about the musicianship, technique and songwriting: it’s just awesome! A welcome surprise is to hear Wojtek Lisicki (LOST HORIZON, EINHORN) again on guitars from the marvellous and sadly defuct LUCIFERION. His riffing is catchy, brutal and tight as shit. Marco Martell (DIVINE EMPIRE, MALEVOLENT CREATION) also delivers a superb job on bass and Varyen’s excellent drumming simply left me speechless. Orlando Logan Perez’s vocal delivery is variating in all directions and comes close to DIMMU BORGIR, effects included. The keyboards and production – mastered and mixed by Dan Swanö – gives this album that modern feeling which one can accuse of being overproduced. Well, usually I’m not too keen on this sound but somehow on “Decoding The Mainframe” this is overshadowed by the amazing quality presented. It feels so harmonic, organic and catchy that it graps you from start to end. I recommend this album to everybody who has a soft spot for bands ranging from DIMMU BORGIR, EMPEROR and even CRADLE OF FILTH to MORBID ANGEL, LUCIFERION, BEHEMOTH, HATE and the likes. In fact EVERYBODY should check this out and AGAINST THE PLAGUE should get an award! Support these guys, this is talent of the highest level and I’m curious how they will top this one! More info at www.myspace.com/againsttheplagues, www.vicrecords.com