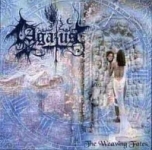 I didn’t really follow these guys’ history, so I had to do some investitation in order to back up my little review here. Well, what I found out was that the members of AGATUS actually are of Greek origin, but live in Australia these days. They started out as a three piece, recorded their debut demo “A Night Of The Dark Ages” in 1993, followed by some promo tapes and then unleashed their debut album “Dawn Of Martyrdom”, which was considered an underground classic by many. That might be one of the reasons why No Colours bootleged that album on CD over here without the permission of the original label (Hypervorea Records) or the band. Don’t know if this is really the truth or if there was bad blood between them for any other reason – so you better don’t quote me on that. Former member Prince Korthnage is no longer with them nowadays, leaving AGATUS as a two-piece and judging AGATUS by their newest output, “The Weaving Fates”, their music and image must have undergone some drastic changes as well. They don’t use any corpsepaint any longer (like on some old pics I came across) and I also wouldn’t necessarily call this new material orchestral Black Metal anymore (that’s how they got labeled in the past quite often). To me this is basically traditional old school Metal, with obvious influences from old MAIDEN and RUNNING WILD (in the guitar department), but due to the overall rawness and aggressive vocal delivery still more rooted in Death / Thrash Metal. What I don’t really get is why they still incorporate those cheesy keyboards here and there. They might have worked well back in the Black Metal days, but to me they sound rather superflous in the whole songwriting now. But all in all this is certainly a very honest sounding and completely old school type of release, just not exactly what I enjoy listening to on a frequently base. So, you definitely should make sure to give it a try somewhere, before you actually spend your money on it. For further info contact: Iron-Pegasus@t-online.de