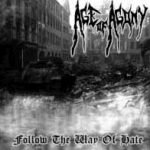 AGE OF AGONY
Follow The Way Of Hate
(No Colours Records)
36:34min

Hungarian old school Death Metal… and a brutal and guttural way is what AGE OF AGONY offers shitloads of against each of our faces on their 2nd album, titled "Follow The Way Of Hate". I don’t know (or actually care) what they have done differently on their newest slab musically, compared to their debut album ("War, Hate, Blasphemy", released on Kárpátia Productions in 2006), but as crude and cold-blooded as I may sound like, I don’t think I have missed much. I mean, "Follow…" simply doesn’t do anything for me. This is the kind of Death Metal that floats in from one ear – and comes out from the other. Similar sounding – call it old school Death Metal or whatever, has been churned out zillions of times before already – and much better and more convincingly in my sincere opinion. Lots of AGE OF AGONY’s songs scream in major pains for sort of try-to-impress-me-more values, now only sounding dull and irritatingly half-made only. I don’t know whether the type of Death Metal they perform on this release, really appeals anyone out there as there’s so much better Death Metal bands quality-wise around these days. Perhaps some of you get your kicks out of AGE OF AGONY, but unfortunately I was left outside of that entrance that would have eventually led me into a pleasing world of AGE OF AGONY’s brutal and guttural Death Metal vomits. I’m also sincerely sorry for that, believe me or not. http://synaptx.hu/agony