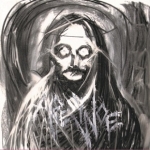 Swedish band, formed back in 2010, presenting us their second album here, described mainly as a Death / Doom / Crust / Punk band. The vocals are punked Death Metal, and so is the music. It still sounds very heavy and although the Hardcore / Punk influences can be heard, the band has translated them all into a more obscure version, thus the Death Metal part shines more. As for the Doom part, they are on the upper-tempo kind of things here, although they do at times play slow, thus adding a lot of heaviness. Some things reminded me of EYEHATEGOD clashing with GRAVE. Also the band is not afraid to use some atmospheric parts here and there, yet all with a very heavy aura like in the song ‘Bad Blood’. I must say that looking at the pictures of the band members, I was expecting more of a Deathcore band, and reading they have such Punk influences gave ma a bad feeling, yet they took those primordial elements of anger from Punk and added them to Metal, like in the days faster Metal was born. But instead of sounding “happy” like some other Deathcore bands, they still sound pissed off and have such a dark aura overall. At times they sound like a mixture of “Left Hand Path” and “Wolverine Blues” with a darker aura. The use of a distorted bass guitar only adds more insult to injury to their already heavy sound. This is the kind of album that will not shine at the first listen but every time you find new things. Fans of doomy Death Metal need to check them out… hell, fans of every kind of Death Metal have to check them out. Great release! www.facebook.com/ageofwoe, www.war-anthem.de