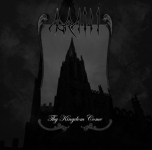 This band from New York is on the scene for quite a while now. Three demo recordings, a split-release and one album ("The Fall Of Mankind", 2009) are listed in their discography right now. Despite that, I haven’t recognized the name AGRATH yet. Is it just because they’re a Black Metal band? Should be the wrong reason, I guess. But a good explanation might be the fact that AGRATH are pretty exchangeable, judging from their second album "Thy Kingdom Come". There are quite a lot of bands that like to play their Metal black and icy cold like the old Scandinavian forefathers of the genre. Some of them are good, some of them not. And AGRATH are one of the latter. The long intro ‘From Beyond’ leads the way to ‘Litany’ and ‘Legion Of Darkness’ that completely pass me by with their rattling sound and ordinary riffs. Seems like I heard all that before… and a lot better! Another too long interlude called ‘La Catedral Del Dolor’ opens up for the title track ‘Thy Kingdom Come’ that is not that much better. The same goes for the rest of the album until the final ‘Messiah Of Death’. Maybe 30 years ago, AGRATH could have gained more interest, but in 2015, their underproduced Black Metal sounds a little too antiquated to me. Yet, there are chances to find out for yourself if you agree. Just check out www.facebook.com/pages/agrath/207385065943380 or www.funeral-industries.com