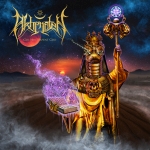 This is actually the third album of this American Death / Black / mythological Metal band that has its lyrics firmly rooted in the Ancient Mesopotamia and nearby lands and legends. As a matter of fact I really like their previous album that reminds me in style of bands like ABSU, MELECHESH and CELTIC FROST with touches of BATHORY and evil Thrash à la early EXODUS. Well, few things have changed here. The production values for this recording, done by a duo of brothers, is very good if maybe the guitar tone is a bit low for my likes, in a way it reminds me of the way “The Sun Of Tiphareth” was done. Also, if I am not wrong the drums are done by a program, as at times they feel a bit mechanic. The Arabic music influence is without doubt a big thing here, and it actually works very good with their thrashy Death / Black Metal. Interludes like ‘Through The Stargate’ sets the mood quite well. At times the music gets into dramatic heights that it sounds more like the soundtrack for an Arabian movie than a Metal band, so if you were expecting extreme Metal with middle-eastern music influence, it sounds as the contrary in many places. The vocals are quite good, but they sound above all instruments, and makes it hard to get the music more. Those production details are taking away power from this release, that undoubtedly has magick, yet it can improve upon those things. If the band is wise to have a better production with a fuller guitar tone, and use a human drummer, I am sure they will shine like Shamash in the epitome of the Pyramid. Even with all those things I found in the sound, it is a quite enjoyable release. www.facebook.com/akhenatenmetal, www.satanath.com