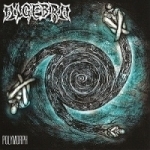 Wow… this CD pretty much made my day. Switzerland’s Thrash Metal patrol ALGEBRA plays the kind of Thrash Metal that I pretty much like to listen to on daily basis. It’s based on strong, ever-roaming cavalcade of crunchy, heavy and seriously wicked riffs, in which the whole band also does count on their technical skills to get their message through: we are here to thrash yer miserable balls to the wall; let the beating begin. The band’s 9-track effort is totally a DIY-release, and they should also be somewhat proud of their accomplishments on their debut studio album, too. And they surely are, just no doubts of it. Not only these Swiss Thrashers count on the power of an endless bursts of Thrash riffs but also feel relatively comfortable with adopting a role as a more progressive Thrash Metal act, which obviously provide them more credibility in terms of showing the band’s true claws as a noteworthy and skillful Thrash Metal act. Guitarist and vocalist Phil Void, in fact, does remind me of Martin van Drunen’s vocal style on PESTILENCE’s 1988 debut record "Malleus Maleficarum"; partly thrashy – and partly deathly vocal style, which also brings a vast amount of heaviness into the songs on "Polymorph". They just should leave some of those occasionally appearing clean background vocal parts out of this stuff as in my opinion they simply don’t sit down too well with the band’s prog-ish and technical Thrash Metal at all. Other than that, no complaints regarding this disc. ALBEGRA are the type of a Thrash Metal act that has an ability to become much more known among the masses for sure. The only thing they need to do is simply keep on thrashing on this high and quality level where they are at now – and they’ll be fine, I suppose. All the latest news of ALGEBRA you’ll get at: www.facebook.com/algebrathrash