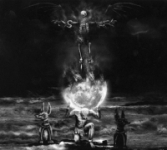 ALGHAZANTH is yet one of those Finnish bands that for some reason never caught my attention back in the day when they started their inputs to the Metal scene during the mid 90s. It is not a secret to anybody that the more raw type of Black Metal is what draws most the attention nowadays. It was a surprise for me that what they currently play still clicks with certain portion of the Black Metal audience given the more “symphonic” orientation of this album. I’m not personally too much into the style they offer on this CD but I can still give them extra points for being brave enough to go against the tide and do their own thing no matter what the trends dictate. They certainly possesses the charm and musical attitude to please the people into a more mainstream Nuclear Blast type of Black Metal along the lines of DIMMU BORGIR during their “Enthrone Darkness…” era. Nor extremely good or bad, it just succeeds in fullfilling the average requirements of a decent somewhat melodic Black Metal album played by a group of capable / experienced musicians (ex-FUNERIS NOCTURNUM and current SWALLOW THE SUN members involved), with a top notch production, bla bla bla… All in all this a release not to die for but if you want to check out what is happening in the more mainstream oriented Metal scene you might be running into this band sooner or later. Check them out here: www.alghazanth.com.