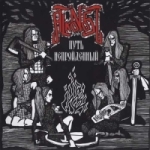 The parallels to one of the biggest “Metal” bands these days – named NIGHTWISH – could be a welcomed marketing strategy or just an unwelcomed curse / coincidence. For the Russian ALKONOST the parallels are starting and ending with their female singer Alena. The band – which is one of the oldest Russian Pagan bands – is for sure not completely unknown due to heavy support by German label Ketzer Records which released their demos for the European territory since their own founding in the late nineties (“Songs Of The Eternal Oak” 2000). The Dutch label Vic Records is now re-releasing two of their former creations and “The Path We’ve Never Made” was originally released in 2006 by Metalism Records. The very ‘classic’ female vocals and the supreme guitar work are the real ALKONOST trademarks and every of the seven songs is in the position to capture a warm and friendly camp fire atmosphere – but the term Pagan Heavy Metal seems more applicable to avoid certain misunderstandings with any heavily armed Pagan warrior. Nearly all songs are easily exciding the 7 minutes barrier and just concentrating on each single song nothing essential is missing but “The Path We’ve Never Made” in total is nothing more than a “one-song experience”. I can’t say that this re-release was completely in vain but if ALKONOST really want to establish a wider fan base they need to spice up their music, add further influences because “The Path We’ve Never Made” is a nice – means totally average release. www.alkonost.ru, www.myspace.com/alkonostofficial, www.vicrecords.com