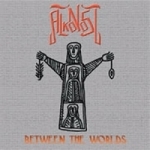 The Russian motherland seems to be an endless source of inspiration especially for the local Pagan Metal scene. ALKONOST are for sure one of the real establised acts in Russia if it comes to the modern understanding of Pagan Metal – but this fact so far hasn’t reached European territory. Vic Records are trying to change this status by re-releasing next to their 2006 output (“The Path We’ve Never Made”) also their 2004 album “Between The Worlds”. But if you check the discography of the band this release is becoming a little complicated. “Between The Worlds” was originally released by MetalAgen Records in 2004 and re-released in 2006 under the title “Mezhmirie” through Metalism Records. Both records are offering the same songs but the second release is presenting the eight songs in an extended version means around 5 minutes longer. The European re-release is using the “Mezhmirie” material with the original album title maybe due to a proper English title. Musically the picture has not changed dramatically – the songs are still dominated by the extremely great guitar work which brings the band in contact with old AMORPHIS releases (“Tales From The Thousand Lakes”/ “Elegy”). But the dreamy guitar work and the classic female vocals are far better embedded in the presented songs. The compact songs – in contrast to their 2006 release – are shorter and spiced by a lot of interesting ideas for example short drum intermezzo or keys which seem to be inspired by the Italian cult act EVOL. The female vocals are slightly reduced and furthermore far more suitable for the song material – really a surprising album after the disappointing “The Path We’ve Never Made” re-release and for sure more than suitable for all the drinking horn addicts. www.alkonost.ru, www.myspace.com/alkonostofficial, www.vicrecords.com