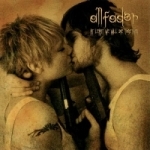 ALLFADER
At Least We Will Die Together
(Osmose Productions)
53:11min

ALLFADER come from Norway. They issued a MCD previously on the now defunct Rage Of Achilles label. With their first full-length, the five musicians involved offer us an interesting and refreshing brand of sophisticated Black / Death Metal mostly based on a perfect musical technique. Slick is the first word spreading to mind while listening to this. The song craft is labyrinthine, showing lot of tempo changes and an obvious concern to stay off the beaten path. The band claim also their Heavy Metal roots, it shows on some rhythmic patterns and highly melodic guitar solos. Maybe I am going adventurous a bit here, but I think comparisons with a band like NEVERMORE could be valid, in the sense both bands mix genres to come up with a difficult to pinpoint style. Of course evidences of the band’s nationality surges more than often on this record, should only because of the typical Norwegian Black Metal riffs popping up very often, yet with a subtle unusual angle (like on ‘Hate Is My Creed’ and ‘Sanctimonious’ for example; note that the band don’t assume the Black Metal paraphernalia image wise). The production on this is carefully worked out to give music its maximum impact; the sound is fleshy, the album has a modern edge you can find of the most known contemporary Scandinavian and Polish brutal bands, if you catch my drift. The only (minor) low points concern the clear vocals used on the chorus of ‘The Blackened Hearts’ that ruin the song (don’t do that again!), while the lead vocals remind me the late Jon Nödtveidt ones on more than one occasion, which is great. Also, the cover art is not my cup of tea, but it is a very personal point of view here, and I concede that it is well done and devoid of any vulgarity; simply, I feel uneasy with the idea of people killing themselves (especially young ones). But all in all this first full length is extremely interesting to listen to, and has a strong longevity value in term of renewed interest at each further exploration. You can’t say that very often these days. I therefore suggest you seriously consider acquiring this! http://allfader.com for further info. Enjoy!