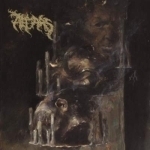 In German I would say “Alter, ALTARS!!!” in a loud, sorta yelling way with wide open eyes and a very stupid grin on my face. All you non-German folks should translate this into a very brief, colloquial eruption of sheer joy over the fabulous debut album by this Australian Death Metal trio. Death Metal from down under? Well, the first name that pops up these days in this category would be PORTAL I guess and while ALTARS’ album – the successor to various demos and splits with the likes of HEAVING EARTH, TZUN TZU – takes it a bit easier on tossing the listener into a merciless maelstrom of abysmal, dissonant and brilliant sounds, the gloomy, harrowing atmosphere fans of The Curator & his bros love, is well in place here, too, yet with a totally different lyrical background. So, PORTAL light or what? Not quite. What intrigues me about ALTARS is that due to more slower sections and rhythmic variety they come across more accessible and should also appeal to fans of 90s MORBID ANGEL, IMMOLATION or even the first three AETERNUS albums as Cale’s pressed yet commanding vocal performance and the overall epic feel reminds me of the latter – without being cheesy of course, we’re talking real Death Metal here. Tracks like ‘Khaz’neh’, ‘Solar Barge’ or the ‘Paramnesia’ trilogy are nicely bassy produced oppressing, engulfing and twisted monuments of death that despite their technical elements retain a massive groove, offer heaviness in spades and actual song structures, something unfortunately rather rare in days where overly sophisticated concepts of Death Metal seem to favor moods or technical skills over solid f**king songs. I won’t start ranting, but there is indeed a lot of hyped or at least overrated “hipster Death Metal” out there and fortunately ALTARS delivers a stunning, addictive opus pleasing both the old school and forward-thinking dark Death Metal lunatic out there within a split second. To get back to my beginning, yes, when hearing this you might look or behave a bit foolish, but damn…this is so good!!! Worship! You can hear it in all its sinister glory here: http://altarsdeath.bandcamp.com/music. To order a copy, visit the label’s site: www.nuclearwinterrecords.com