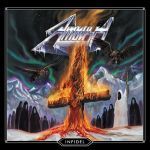 AMBUSH is a Heavy Metal band from Sweden and “Infidel” is their third album. They have a really honest approach to the style with no gimmicks whatsoever. Upon my first listening I thought it would be just another Heavy Metal album, but it rapidly grew on me and I had to give it a couple more spins. It turns out the guys know their craft and they hit all the right spots when it comes to memorable tunes, headbanging riffs, flashy guitar leads and catchy vocal melodies. It all starts with a solid rhythm section of drummer Linus Fritzson and bassist Ludwig Sjöholm. I think they do most of the heavy lifting in these 10 songs, keeping them amazingly tight. Adam Hagelin and Olof Engkvist make up one sharp guitar duo, shooting great riffs all over the place and adding some tasty guitar leads. And to top it all, you have vocalist Oskar Jacobsson. I can’t really pinpoint his style. He goes from Dickinson to Kiske to Halford hitting both, low and high notes effortlessly, but without sounding like a copycat. Simply an amazing vocalist. Nowadays it is really rare to run into such a talent. “Infidel” boasts a solid production. The mix is nicely done; clear yet gritty and gnarly. The guitars have that traditional British tone (you know, “the one”, right?), a round, yet metallic bass sound and pounding drums. The vocals are perfectly set in the mix too and they stand out without overpowering the music. I really liked how the spiced some songs with the good old “chain gang” choruses. Overall, a stellar production that highlights every aspect of AMBUSH’s music. AMBUSH can be put right next to all the classic bands that once pioneered the rise of Heavy Metal. Their grasp of the genre is surprisingly good. I feel obliged to look into their previous albums because I think I have been missing some great music from these guys. And yes, I am also looking forward to their next output, although “Infidel” has just been released (March 2020). This is high quality, classic Heavy Metal with some Speed Metal touches. Top notch stuff to bang your head to! Show the band some well deserved support at www.facebook.com/ambushsweden and get this album from their label: www.hrrecords.de