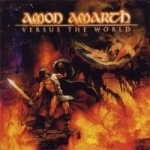 I think with their 2002 release AMON AMARTH may proudly call themselves the Scandinavian version of BOLT THROWER! The Swedish Viking-horde is heavy as fuck, but also as melodic and melancholic as most Swedish melodic Death Metal acts are, except – AMON AMARTH is better than most of them!!! Again they created massive hymns of war that not only satisfy the fans, but maybe also arouse interest in Swedish melodic Death rejecters like me, damn, this is really a great album and I swear that Metal Blade did not pay me for saying that! Especially the screamed parts (which dominate on “Versus The World”) create a mighty and intense feeling, the riffs and thundering drums do the rest. The production sounds like Peter or Tommy Tägtgren, although I am not sure of that (I do not have an Info), but it definitely fits to this type of music. What’s absolutely awful on this CD is the Coverartwork, where a strong, bare-breast Viking warrior surrounded by flames raises his sword and shield against the approaching globe of planet earth, that is not only pathetic but also looks like shit!!! Anyway, despite this optical weakness, the album’s contents are finest Viking Death Metal. My personal highlights are the impressive opener ‘Death In Fire’, the crushing titletrack, which varies excellent between growled BOLT THROWER-like parts and Swedish melodiosity, the atmospheric “semi-ballad” ‘Thousand Years Of Oppression’ or the awesome closing track ‘…And Soon The World Will Cease To Be’! Although most songs are in the typical catchy mid-tempo, they do not wear out after the 5th time listening to “Versus The World”. Fans should love this new album as one of AMON AMARTH’s best and people in search of Swedish Death Metal that does not have anything to do with modern crap like IN FLAMES or SOILWORK should check out “Versus The World” as well, it’s great! For more information: www.metalblade.com.