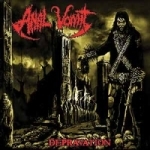 … and filthy are the hounds from Lima-Hell, attacking with their second full-length strike! After the superb “Demoniac Flagellations” which was one of the highlights of 2006, Peruvian ANAL VOMIT shell out the equally dirty and relentless “Depravation”. Let’s start from the outside: again, the cover has been masterly created by Juan Castelano. While a reddish blasphemic orgy graced the debut album, one now gets presented a grim Metal warrior holding a decapitated head in front of a ravaged church with some fornication going on in the background, all in a pestillent yellowish greenish tone… so no more questions about the content, sophistication or decency are needed! Inside the booklet, every lyric is accompanied by a great dark demented drawing, either blasphemic, violent, pornographic or all of the above. Just as on “Demoniac Flagellations”, one can find both Spanish as well as English sung tracks on this record, a thing which I like very much – Spanish vocals just fit perfectly to this style! Musically, ANAL VOMIT deliver the goods as competent as on the predecesor, which means aggressive and wild Black / Death thrashing Metal with influences from the South American dark past as old SEPULTURA, old SARCOFAGO (rather obvious considering the monicker) or for example SEX THRASH, played tightly with all the ferocity and screaming tremolo solos needed for a killer record. The production itself is absolutely faithful to the overall style and feeling of “Depravation” due to its analogue sound – while being sufficiently clear to make out the details the overall affair could have been recorded in the mid eighties. Some riffs here and there reminded me of the the first two BATHORY records, some bits were reminiscent of old SLAYER and even the earliest NAPALM DEATH can be found in traces (the beginning of ‘Escupe De La Cruz’ and some basic chord riffing here and there). So, as opposed to most “retro” acts who only deliver some bloodless sucking up to past idols, this record breathes passion and works in itself, not only in reference to the past which sets ANAL VOMIT apart from most contestors in this field. The overall comclusion here is, that with ten tracks clocking in around half an hour these sickos have come up with a more than worthy follow-up to their awesome debut which obviously is a real “must – have” for fans of the above mentioned bands or acts that travel a similar path in spirit and attitude like NIFELHEIM, for example! Oh, and friends of the pictures in the first album will be delighted by the naked (you better take that literal, folks!) insanity featured again. Perfect… now, I only want their label to print smaller shirts, hehe. Buy this! www.analvomit.tk, www.myspace.com/analvomitperu