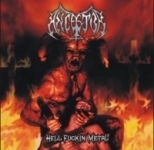 Hailing from Cuba are ANCESTOR, a Black Metal band in the vein of late 90s era MARDUK / DARK FUNERAL. I am not familiar with many bands from Cuba, let alone Black Metal bands so this made for an interesting review. While this particular album was released in 2008, it was recently brought to my attention by Joel at www.alprods.net. The music is itself is a fast paced assault that is your run of the mill Swedish styled Black Metal. The first track starts out with a very pointless intro but then jumps into your typical Black Metal crushing theme of hyperblasting guitars / drums. I can think of these guys as MARDUK lite in a certain aspect. Vocally the singer sounds like Legion to the point where you have to ask yourself if this really is the real deal. With that said, these guys do create some pretty interesting riffs and interesting songs. ‘Vlad The Impaler’ and ‘Refuse To Renounce’ are good examples of the musicianship of the band. The musicianship on this record is good but not something that would be mind blowing or a reinvention of the wheel. I think these guys are on the right path but just seem to lack a bit of originality. The album is still a good effort that provides your typical satanic inspired lyrical themes. The guitars and drums do complement each other throughout the music. The album title itself has its moments of bland but don’t let that fool you as the music itself quenches your thirst for some Black Metal. Running at under 27 minutes, I felt that this album should have been more of an EP rather than a full album. The music left much to be desired, but that is not to say that the band can’t produce some quality material. Perhaps extending the songs to meet above the 35 minute mark would allow one to have a fuller in depth impression of the band’s musicianship. For more info: www.alprods.net, www.cuba-metal.com/bandas/ancestor.html