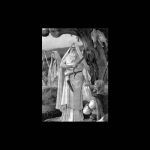 ANCIENT FLAME is a one dude band, and he likes it epic and old – gallopping and wagnerian BATHORY style. More druids than vikings though, but the same forest and mountain area. And he likes these Norwegians IMMORTAL and their look-to-the-sky-with-the-chin-streched-forward-and-make-an-utterly-grim-and-frostbitten-face… the Abbathian way: more the horns-up than the rotorbanging parts, although here and there he adds some fast parts as well (for example in ‘Blade Of Honor’ or ‘The Rising Flame Of Hate’). But for the most part we mosh and chant through this quite timeless Black Metal piece. Sometimes the creator J.L. (Jude Law?) grabs his keyboard, pushes the heroic button and plays through minor chords but never slips and falls into the lakes of cheese. Decent and nice. The production is clear and epic (recorded and mixed by himself), the melodies are there but mainly we get cord shifts. The voice is good but tends to get a liiiittle bit too monotonous after some songs I have to admit – reminds me of the distorted vocal delivery Vorphalack did on SAMAEL’s “Above” record. Sometimes I think of WITTR, sometimes – as in the track ‘The Druid’ – I think of FALKENBACH, without the clean sung viking ohhs and ahhs – they only come from the background keyboards. Songs are all between 5 and 6 minutes long, with a glass of wine quite enjoyable. I would like to tell you more and dive into metaphorland, but I think I said it all. ANCIENT FLAMES recorded a good, solid, epic record. In the early 90s I would really have enjoyed it. Now there are so many records of that sort I would listen to before turning to “Tyrant Blood”. But nonetheless: I respect the work he put into this record, well played, well written, well produced. You can check it out here: https://ancientflamepa.bandcamp.com, label contact: https://morbidchapelrecords.bandcamp.com, www.morbidchapelrecords.com