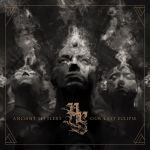 Everything changes, it all stays the same? Somehow this album sounds like a remain out of the nineties. Partly at least! Roughly riffed and with hollow drum-sound the opening track starts, sort of Thrash and Death Metal meeting Hardcore once again. Besides all the groove, songs like ‘Peregrination’ or ‘Into The Depths I Ride’ suddently do turn around, literally falling into the depths, playing with melodies, acoustic instruments and spheric, almost spacy elements. Listenable inspired by 70s Hardrock and Psychedelic as well as the dooming mood of mighty SABBATH, like obviously riffed onward in the title-track. Walking through all these contrasts, one foot in the rough, almost punky and compromiseless sector, the other always ready to take a exploring and really refreshing walk into progressive and experimental spheres, like in ‘Cerements’ or ‘Cast In Gold’. Not to forget riffing and grooving monster-songs like ‘The Black Rainbow’ and ‘Library Of Tears’. Singer Antony Hämäläinen has the ability to scream the whole thing forward, to raise his voice over the instruments but also to let his voice sneak and crawl through the lines, so the listener might think of current AT THE GATES or SOILWORK. This international based six-piece not only managed to squeeze a tour into the pandemic-times, they also realized this multi-layered album. After the release of the “Autumnus” EP in 2021 follows now a first, impressing full-length. The band’s goal to explore the frontiers of modern melodic Death Metal by mixing it with heavy Rock’n’Roll riffings and the use of synthesizers and keyboards was successful. An album,which offers more detailled passages with every spin you give it. Good one! www.facebook.com/ancientsettlers, https://ancientsettlers.bandcamp.com