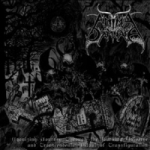 The info sheet that came along with ANIMA DAMNATA’s second full-length after a demo in 2001 and the re-release of their debut "Suicidal Allegiance Upon The Sacrificial Altar…" as a split album with THRONEUM told me something about Death / Black, but this is a little misleading because most people associate bands like IN AETERNUM or DISSECTION with this genre. Polish ANIMA DAMNATA sound completely different!!! Ever thought of a mixture of SEVERE TORTURE, IMMOLATION and ANGEL CORPSE? No? Nor did I, but this quartet from hell succeeded in skilfully combining elements of all these bands and uniting them in one violent well performed and well produced brutal Death attack, that should leave no Death Metal freak dissatisfied. With their mocking, antireligious, slighty perverted concept ANIMA DAMNATA might even attract people into BEHERIT, BLASPHEMY and stuff like that, since they also have been born with gasmaks, ridiculous "necro sodomizer of the perversor who hammered together the desecrating cross of jesus christ, blashphemy hell" – like pseudonyms and "poser-factor 10" as well (visit www.animadamnata.com for proofs). Musically those crazy guys appear damn tight, experienced and manage to blend chaotic "melodies" one might compare with the aforementioned IMMOLATION, straight and aggressive blasting and deep vocals in the SEVERE TORTURE – vein with some screamed interruptions Pete Helmkamp could not have done better. Sometimes the songwriting could have been a little more compact and a couple of memorable hooks would have done the whole thing some good, but despite that this is a damn good album everyone into extreme and sick sounds should check out! The label can be found here: www.paganrecords.com.pl.