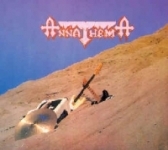 Not to be confused with the better known ANATHEMA from England, ANNATHEMA (note the extra “N”) hail from an unlikely place: Serbia. They weren’t half bad, either. AreaDeath Productions has kindly compiled ANNATHEMA’s albums into one boxed set for our listening pleasure (each CD is also available on its own – Frank). A bit of trivia: ANNATHEMA’s second album, “Empire Of Noise” is rumored to exist in only 120 original copies. Talk about obscure. This band is a rare case; rarely was it that a band went unnoticed for anything save for two major factors: talent, and underground connections. ANNATHEMA appear to have had not enough of one, and almost none of the other. However, as Thrash goes, they were acceptable: speed, charm and enjoyably drunk riffs. Good to listen to while smashed. This re-release is limited to 1000 numbered copies. www.myspace.com/annathemaband, www.areadeath.net