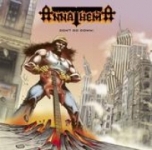 Powerful Heavy Metal with gruff vocals is what you get from Serbia’s ancient (since ’82, beginning in former Yugoslavia) Metal band ANNATHEMA. Originally recorded in 1997, this re-issue is mostly mid paced with good rocking riffs and occasional sections when the heavy drummer lets the double-bass roll out like MOTÖRHEAD’s ‘Overkill’. That this band has lasted in a war-torn land is testament enough to the power of Heavy fucking Metal in the face of all adversity. They have character. And they rock the fucking house. So check it out! This re-release is limited to 1000 numbered copies and comes with a bonus DVD (ANNATHEMA live at Exit Festival, Novi Sad, Vojvodina in Serbia, 07.06.2006). More info at www.myspace.com/annathemaband, www.areadeath.net