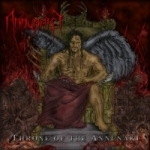 If you’re having trouble pronouncing the name of this band, just replace it with “E.T.” instead! As the moniker is taken from the ancient Sumerian / later Babylonian mythos about the ANNUNAKI: the royal inbred children of brother and sister Sky gods Anu and Ki, whose offspring the ANNUNAKI later in their adulthood attain the status of the High Council of the Gods. Later these myths were discounted by several scholars who surmised that the ANNUNAKI were merely “Extra Terrestrials “, from what the scholars could interpret from the many glyphs left throughout the region, that often depicted the ANNUNAKI as being man-like creatures with wings, and of whom had “descended to earth in antiquity” and who may have tampered with the genetic makeup of early mankind. Hence the cover art of this CD. It wasn’t until 1976 when obscure researcher / journalist / later author Zecharia Sitchin, promoter of the Ancient Astronaut Theory; the possible theory to the “real” origins of humans here on earth. That Sitchin claimed to translate Sumerian cuniform texts and published the first of his books entitled Twelfth Planet, where he asserts that the ANNUNAKI were indeed extra terrestrials who worked and interacted along side the Sumerians, and who were the alleged to be the ones responsible for the introduction of advanced technology from the heavens to those of Sumeria. Intriguing I guess. Somewhat hokey and unless the lyrics (that weren’t provided) prove me wrong, these concepts are the equivalent of taking what VADER or better said what NILE does theme-wise with their band, a step further into the unknown. “Throne Of The Annunaki ” marks the first official debut album from ANNUNAKI’s drummer Kevin Kuzma on his record company Militia Records. Thirteen songs of moderately interesting American Death Metal that reminds me more of what HATE ETERNAL / MORBID ANGEL have going on in their camps yet fused with a bit more blackened references for the kids. Recorded at Trax East, the production is remarkably clean yet with just enough power to grab your attention. At this time I would like to give a major thumbs up for the rhythm guitar sound on here, it’s really great! Next time though I hope that you get closer in regards to what you had here for the levels of the rhythm sound, with the levels of the Leads, as they are hopelessly buried and what talent I could hear shouldn’t be cancelled out in the final mix. Featuring the skin-work of ex-BLOODFEAST drummer Kevin Kuzma. Tight and professional as always, it’s good to see a veteran as Kuzma is to the U.S. Metal scene still bashing it out with his trademark precision and killing capacity. Great job! Contact: P.O. BoxX 1016, Bayonne, NJ 07002 USA or info@annunaki.us or www.annunaki.us or www.militiarecords.com