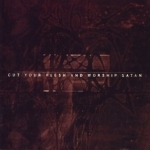 When you know a little about ANTAEUS, it is no wonder to see them signed on the label run by the legendary Killjoy. This French band hail from Paris and has gained a strong following during the years, due to their dedication and tenacity. I saw the guys on stage twice, and I can assure you that an ANTAEUS performance is the nearest you can get to total chaos. Vocalist and leader MkM has never recovered himself from seeing the mighty BLASPHEMY live, and it shows. This first real effort by ANTAEUS (discounting some split 7″es and compilation tracks), is faithful to the spirit of the primitive Death / Black Metal unleashed by the aforementioned Canadian psychos, even if the music sounds slightly different. ANTAEUS could be seen like the perfect hybrid of “Battle In The North”-era IMMORTAL, “De Mysteriis Dom Satanas”-era MAYHEM and anything by SADISTIK EXEKUTION; said this way, you can easily understand what ANTAEUS is all about. Don’t look for melodies, grandiose keyboards arrangements and aesthetic research, but expect instead a blast of pure energetic hate, complimented by a powerful production. OK, all the tracks on this album sound more or less the same, but the ferocity displayed here is worth that. You even get a live track, ‘Daemon’, which could give you an idea of the kind of mayhem delivered by ANTAEUS. Be aware that MkM applied to himself in the past what the album title suggests, as he severely slashed his arms the way Trey Azagtoth did a few years ago. Note also that the drummer Storm is no other than Hellblaster in ARKHON INFAUSTUS. To be short: ANTAEUS are not pretty and trendy, but ugly and total cult!