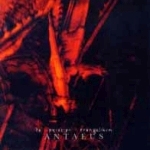 The tyrants of the French scene are back with a vengeance! I was a little afraid that their previous album (“Cut Your Flesh And Worship Satan”) could be a one shot affair, knowing how difficult it is for such an uncompromising band to survive these days, but my fears were misplaced fortunately. Gone are the days when ANTAEUS were signed on the infamous Killjoy’s label Baphomet Records, this time they are back with a brand new contract, obviously renewed ambitions and (I hope) a far more better exposure. Even if ANTEUS have basically kept the same style of extremely raw Black / Death Metal to this day, I am happy to say that they have progressed a great deal since their first. The tracks are far less monotonous than on the “Cut Your Flesh…” offering, but don’t expect technical niceties instead, because this album is nothing less than a furious aural assault shaped to destroy. What has always pleased me with ANTAEUS is their passion and dedication to the extreme Metal scene while ignoring the trends and the flavors of the day, being the cultured Metal scholars they are in fact. The production of this album is rather good (and I am not talking here of a lame sounding effort for the sake of being “true” or whatever), it suits the music the proper way. Singer MkM has dropped the frantic screams of the past in favor of a more modulate way of vocal delivery (he reminds me of Satyr on more than one occasion). The drums sound very original here, with bizarre beats and rolls, call it semi-blast pacing if you want. Add to this extremely raw guitar playing (without any solo) and you obtain a damn good extreme record on which I have even detected this time strong ANGELCORPSE influences, especially in the guitar sound and the song structures departments (for instance, some parts of the ‘Illegal Angelz’ track are very similar to the semi-classic ‘Reap The Whirlwind’). This sophomore release shows a lot of freshness all credit given to the obvious rage to conquer the five ANTAEUS warriors are possessed by, even if the music could not be called original in any way. Don’t miss them as they will tour Europe in fall 2002 with DEICIDE and CENTINEX and guess what, I am pretty sure on who will steal the show then! Meanwhile, go to your favorite Metal monger and ask for “De Principii Evangelikum”, because the titans rise again! Thumbs up!