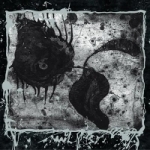 I should check out the Profound Lore Records catalog more often. So far they have released some pretty unique bands and Canadian ANTEDILUVIAN is one of them. After 3 demos, a split and a comp, they just released their debut album (the European edition is out on Invictus Productions). An impressive one I may add. The band draws their main influences from the dark side of Death Metal and the raw side of Black Metal. As the album plays, the feeling of claustrophobia and desperation starts getting bigger and bigger. And I mean it. "Through The Cervix Of Hawwah" is evil and massive without being too pretentious. You wont find the usual triggered or plastic production. It sounds really analog and to a certain point old; old as in that early 80s punch à la MOTÖRHEAD or VENOM. The mix is a little bassy, but clear. And I am not completely convinced about the drum mix even though It blends in nicely as part of the crawling chaos. And these guys know how to create an atmosphere with almost hypnotic, funeral doom passages and slow pounding riffs. So yes, ANTEDILUVIAN caught me by surprise, because this album follows the good old ‘what you see is what you get’ rule, a complex, dark piece of brutal Metal. Add to this a low register grunt à la PORTAL or INCANTATION and you have a strong contender for one of the best albums in 2011! Info here: http://antediluvian.bandcamp.com, www.profoundlorerecords.com, www.invictusproductions.net