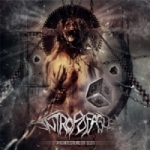 Comatose Music has just released ANTROPOFAGUS second album "Architecture Of Lust". After their debut album, an EP and a split, they present a brutal 9 song collection. Yep, this is brutal Death Metal, full of blast beats, double kicks, deep growling vocals and technical proficiency on the every department. The production is perfect and the mix has its own dark aura. Every instrument is present and focused on punishing the listener through the album. The musicianship displayed here is top notch and Tya’s vocals really stand out. I was a bit surprised, since this style of Death Metal is, for me, a bit rare in Italy. But these guys deliver the goods nonetheless. The songs per se are not too different from one another and maybe that is their only flaw. Even though there are riffs a plenty, some songs lack character or a memorable riff to hook you up. Imagine a more brutal version of NECROPHAGIST sans the melodic guitar wankering mixed with some good old New York styled Death Metal à la ABRAXAS. They also have some groove fueled parts here and there and they work really well too. But, in my humble opinion, ANTROPOFAGUS need a little less speed and some more focus on the heavier and slower side of the sub-genre to really develop a character. Anyway, if you are intro brutal Death Metal done the right way, I can fully recommend "Architecture of Lust". Did I mention the lyrics are influenced by Clive Barker’s "Hellraiser" movies? Great stuff! Info here: www.antropofagus.net, www.comatosemusic.com