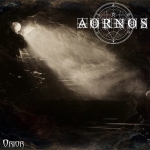 Is it possible to bring back to the surface the likes of EMPEROR’s “In The Nightside Eclipse?” Apparently, it is, and the Hungarian one man project AORNOS’ debut album has the same vibe to it!!! Call it a very unusual revival or a return to forgotten approaches in a style that has become so limited as Black Metal with the shitloads of pigeonholing subgenres made up every day, AORNOS is still a good option in pure Black Metal terms. Here’s one album which such obvious comparison is unavoidable, but it does its justice. The same eerie and yet epic atmosphere is present throughout the whole album, its guitars cold and sharp, presenting slightly convoluted melodies, that background vocals almost identical to Isahn’s trademark. The songs are mostly fast-paced and the keyboards set most of its gloomy tone, and if the structure and riff compositions aren’t close enough to the Norwegian classic, the tones chosen for the mix are surprisingly similar too. One could get a bad picture of the album by my overuse of a single album comparison, however, I do think this is one example of a very difficult thing to do, once so many bands have moved on to either a clearer sound or an extremely reverb-fed mass of sound, so common in Black and Death Metal bands today, leaving the typical sound of the nineties aside. But although similar in almost its entirety, AORNOS also attempts to inject a more personal touch in some of the songs by making use of martial-like passages as in ‘Aeternum Veritas’, one of the albums incredibly short songs, as well as one or another riff spread timidly through other tracks. Also, being AORNOS a one man’s project, I wouldn’t be surprised if there were programmed drums on this album, for it sometimes sound a bit too strict and precise, even if some other parts sound as if it was genuinely played. All in all, a good album that doesn’t seem to intend any groundbreaking move within music, but rescuing an important way to deliver Black Metal as in its glorious days. If you’re an EMPEROR fan, maybe you should check AORNOS for the sake of experience competent Black Metal (no surprise that the bonus track ‘Ensorcelled By Khaos’, is also an EMPEROR cover – Frank). The band has already released a second album, but this debut album draws the line on what its sole member Algras is up to. More info at www.facebook.com/aornosblackmetal, http://satanath.com/sodp