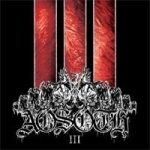 AOSOTH is a dark female force in the pantheon of the Order of the Nine Angles, hence the name for these 3 Frenchmen´s pure evil-reeking entity. "III", as the album title already suggests, is AOSOTH’s 3rd full-length album in order, has 6 songs that have been sliced into six Roman numeric titles. Since this is also the very first AOSOTH album I have ever become familiar with, I am forced to let the music do all the talking here, without giving any references to their previous outings because I have no experience with them at all. AOSOTH’s evil-oozing, frenzied and aesthetic Black Metal has often been compared to probably the most notorious and appreciated French Black Metal act ever, DEATHSPELL OMEGA (which has become familiar to me, mostly through their 2003 record, "Si Monumentum Requires, Circumspice").  AOSOTH have pretty much the same components within their multi-layered pitch-black, Satanic Black Metal as DEATHSPELL OMEGA do; spreading the black wings of all plagues everywhere – and making this piece of work of black arts such a soul-wrecking experience until it has totally driven you against this one agonizing dark corner, in which you start feeling totally lost and hopeless with yourself – the more you start sinking deeper and deeper into the band’s bottomless, dark abyss. AOSOTH reeks of all things ominous and mind-bogglingly tenebrous – and there’s something truly life-threating in their sound, which cannot be explained. Now dare to take this abyssal journey with them, with a potential risk to get infected forever by them? www.myspace.com/aosoth616