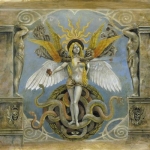 ‘Silver Dagger And The Breathless Smile’ ends this new record from French AOSOTH, an epic track with grand proportions, extreme progressions and degression, darkness and eerie sinister light. A tour de force of emotions and mind-shattering moments, and throwbacks to the grandeur of when the second wave of Black Metal ruled the Northern Skies – some guitar riffs scream an ode to "Panzerfaust", from the dark minds of DARKTHRONE, though in a subtle and well incorporated way. Subtle and well incorporated are two keywords concerning AOSOTH’s fifth full length release "V – The Inside Scriptures". A dark massive wall of grinding guitars and pummeling drums are raping your ears all the way through the 46 minutes of pain and torture, with the vocals just beneath, together with an enourmous amount of small details, as tricky rhythm structures, riffs straying from the main path, changes in atmospheres, extreme paceshifts, black vortex’ pulling you in and vulocanos shooting you out, intense, very intense. The band has evolved quite a bit over the years, always a purveyor of extreme dissonace, progression and radical drifts into the traditional, painted in a, at times, quite harmonious picture, other times quite abstract, but still tied very well together. These guys are quite talented at both writing songs and using their instruments. Though it will be quite exciting to see where the band ends up, as INRVI and BST have left mainman MkM (which you might know from the mighty ANTAEUS) after the recording of this album. Though until we discover what the future will bring, delve into the darkness of this album and succumb to its greater power: www.facebook.com/aosoth, www.agoniarecords.com