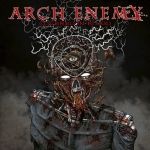 I find cover versions quite interesting, if they’re done well, of course. Often cover versions give a good idea of the covering band’s influential sources, which often are the obvious with a few unexpected twists and turns here and there. Whole albums of cover versions tend to become a tad too much for me. Though I guess there is a demand for such albums, as some bands do release one here and there, and now the time has come to one of Sweden’s finest, ARCH ENEMY, a double album (and single CD) with 24 tracks, spanning over quite some different bands and genres. The party is started with ‘Shout’ from TEARS FOR FEARS, which is delivered decent, and we are getting through Punk bands as SHITLICKERS, MODERAT LIKVIDATION and DISCHARGE, softer things from bands as SCORPIONS and EUROPE, some Heavy Metal, which includes a rather ruined version of DREAM EVIL’s ‘Book Of Heavy Metal’, I really can’t feel that one. And a blast from Michael Amott’s past, with ‘Incarnated Solvent Abuse’ from his first album with CARCASS "Necrotism – Descanting The Insalubrious". Most of the songs are getting a good twist in the ARCH ENEMY grinder and made their own, though it is of course hard not to sound as ARCH ENEMY, now when the band has a quite charismatic frontwoman, if one likes the vocals or not, is another case. Musically it is a quite good album, and some interesting takes on some interesting bands, so if you rock to ARCH ENEMY, this is a sure buy (I personally think that they really did a great job on all the D-Beat Hardcore Punk stuff, especially DISCHARGE, G.B.H., ANTI CIMEX and the likes, because Alissa’s pissed off sounding vocals really fit that kinda style extremely well, but also their very heavy version of ‘The Oath’, from the least successful KISS album "The Elder", turned out fantastic in my humble opinion – Frank). Enter the symposium of sickness right here: www.facebook.com/archenemyofficial, www.centurymedia.com