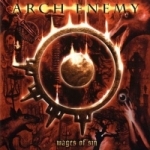 Sometimes life can still be full of surprises… For example the fact that someone you kind of lost out of sight and never heard from in years, all of a sudden turns up in one of your fave bands! This was the case with the new (not soooo ‘new’ anymore in the meantime) ARCH ENEMY vocalist Angela Gossow. I still remember the days very well when I traded demos (BEYOND BELIEF, DESULTORY…) and went to gigs (KREATOR…) with her or saw her promoting her first band ASMODINA. The times they are changing… Anyway, "Wages Of Sin", ARCH ENEMY’s latest album (after a huge delay) is finally out in Europe. Many (European and American) fans probably already have this album in their collection for several months and bought it as an expensive Japanese import (just as I did…) as the album was released in Japan about one year ago. In order to make the purchase of "Wages Of Sin" still attractive, Century Media decided to release the album over here with some additional bonus-stuff like one unreleased track (‘Lament Of A Mortal Soul’) and the videoclip of ‘Ravenous’. There’s also an additional second disc filled with rare and hard to find ARCH ENEMY material which are mainly the bonus tracks of the Japanese pressings of earlier ARCH ENEMY albums, all featuring original ARCH ENEMY vocalist Johan Liiva (in details it features the following material: ‘Starbreaker’ – previously unreleased JUDAS PRIEST cover, ‘Aces High’ – IRON MAIDEN cover, previously only available on a Japanese tribute album, ‘Scream Of Anger’ – EUROPE cover, previously only available as Japanese bonus track, ‘Diva Satanica’, ‘Fields Of Desolation ’99’, ‘Damnations Way’, ‘Hydra’ – all four previously only available as Japanese bonus tracks and ‘The Immortal’ – enhanced video clip. The CD furthermore comes with an extensive booklet including liner notes by Michael Amott himself – Frank). Angela’s very aggressive vocals totally fit the ARCH ENEMY material and to my humble opinion she totally blows away original vocalist Johan Liiva. It’s very hard to compare her vocals to anybody out there in the scene. She does remind me a bit on good old CARCASS mainman Bill Steer though. When listening to the material on "Wages Of Sin", you still easily recognize some of the CARCASS sound through the great leads and solo’s of guitarwizard Michael Ammott which are more melodic than after before (the CARCASS classic "Heartwork" often came to my mind…). "Wages Of Sin" is to my opinion without any doubt the best ARCH ENEMY album so far and totally blows away most of all the mediocre releases out there. Songs like the opener ‘Enemy Within’, the raging ‘Ravenous’ (just listen to the leads in the beginning, if that part doesn’t make you want to tear down your livingroom, well…), the frightening doomy ‘Savage Messiah’ and the very brutal ‘Dead Bury Their Dead’ simply shred!!! The very powerful production (which was laying the capable hands of Andy Sneap) makes "Wages Of Sin" sound extremely powerful, aggressive and very clear at the same time and. Also the artwork is really nice to my opinion. "Wages Of Sin" already was one of my fave releases of 2001 and even after many months, it still doesn’t bore me a second. Lets cross our fingers and hope that ARCH ENEMY will tour over Europe soon and we will get to see this unique band again (as their first gig with Angela which was scheduled at Wacken last year unfortunately fell through). Together with DIABOLIC’s "Vengeance Ascending", this is about the best melodic AND aggressive Death Metal album that you can get for your money. BUY!!!!!!!!!!