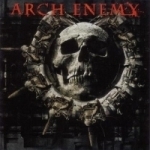 My problem with ARCH ENEMY has always been the fact of the cheesy Mallcore / Ozzfest mentality that this band has had surrounding it for years now, like a terrible fart, that just won’t die away. Corroding what cool and promising potential they could offer to the real Metal world and seemingly settling instead on just being a noteworthy festival act – a few clicks above THE HAUNTED and sandwiched somewhere in between the likes of WITCHERY, THE CROWN and MACHINE HEAD. ARCH ENEMY’s albums I will agree are unmistakable in the semi-wicked riff department, however, their overall song writing is uncannily similar CD to CD, like another IRON MAIDEN. And at the very same time each disc has some of the best production values that money can buy, yet you can be sure each record of theirs will fall flat on actual substance. A queer duality or would that be quad-ality (if there was such a term)? The point is, that I am trying to make here, is that no matter how much I would like to be a fan of this band, I find more and more reasons to dislike them and to riddle this group with .50 caliber bullet holes. The attention given to riffs and to the production won’t carry a band more than twenty feet. The rest of it has to mesh together and has to grab the balls of its intended listener for it to work, standard Metal knowledge 101.Herein with this record though, I hear just a mish-mash of goings on, that not only bore me in the end, but the songs ultimately fail to capture my attention for more than a few seconds or a few sections of each track. Add to this strategic failure, the pathetic Death Metal growling attempts, considered by many as pure torture, made here by mistress Angela, in my opinion totally clip the wings of each song’s desire to fly. Failing to convince, at any given instance, that she is the best candidate for the microphone. Not only this, yet as well her lame vocals delivery just kills what could be some of the best material – riff wise – that I have heard yet from the brothers Amott, and all the while Angela simply and effectively does not have what it takes, the command or the technique, if you will, to (affectionately) hold my balls. Contact: www.archenemy.net or www.myspace.com/archenemy or www.centurymedia.com