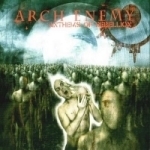 Although their previous album was recorded back in 2000 / 2001, it wasn’t available for other markets than the Japanese one until early 2002, so it seems like this album comes pretty close. The fact is that ARCH ENEMY are here with another extravagance of class, quality and virtuosism. Many [the purists] will say this is not Death Metal, like meaning that Death has to be something that must lack of quality, as well as others [the most Heavy ones] will think this has too much quality to be Death. Anyhow, the thing is that ARCH ENEMY is a band that seems not to have any limits in their sound, but of course, having a very well stablished basis in a CARCASS-like Death Metal (era “Heartwork”). The voice of Angela Gossow sounds more aggressive than in their previous opus and has a personality that’s slowly becoming one of the most notorious trademarks in ARCH ENEMY. The 13 songs on the album have lots of variation, going from more aggressive songs like ‘Silent Wars’ or ‘Despicable Heroes’ to more “heavy” songs like ‘Instinct’ or ‘Saints And Sinners’ and containing all these catchy rhythms, worked song structures and outstanding guitar solos that makes of every ARCH ENEMY album, undeniable works of high quality. This is of course a step forward in their career!! (can somebody please explain to me why they’ve added a bonus DVD (!) with audio only (!!) material???? Doesn’t really makes any sense to me at all… – Frank).