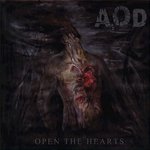 ARCHITECT OF DISEASE
Open The Hearts
(The End Of Time Records)
45:05min

This is Black Metal that’s slightly different than what we’re used to spin. Because of the melodic guitars, the pretty clean production and technical approach, this will not be in everyone’s favour. Halfway I lost track and a track like ‘Devour The Sun’ was just too much. But first something about the band… ARCHITECT OF DISEASE is a pretty young band from Poland. It features former members from CHORDATA, IUGULATUS, HECADOTH and others. Formed in 2012, "Open The Hearts" is their first release, released on The End Of Time Records. Never heard of them before, but they seem pretty young as well. "Open The Hearts" features 7 tracks but clocks almost three quarters of an hour. It’s not the first time we get a pretty progressive form of Black Metal from these regions and it can be impressive, like for instance FURIA. With the first tones, this album sounds fresh and the band seem to use this for incantations or overcome possession. The riffs create a certain tension and sometimes speed up in a thrashy way. They fail to take me in their banishment. The vocals by Wilku distract too much for this and sounded like a mix of Attila and late L.G. Petrov. Also, it starts to sound the same after a few tracks. On the title track it works finally and ‘In The Blaze Of Havoc’ has its moments, but that doens’t save this record. That doesn’t take away the fact these guys are skilled musicians. But… their technical approach dominates too much to build any real intensity or atmosphere. Missed chance… Still curious? Check this link for more info www.facebook.com/pages/architect-of-disease/425689324215174