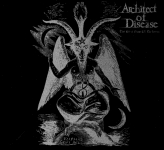 ARCHITECT OF DISEASE
The Eerie Glow Of Darkness
(The End Of Time Records)
45:40min

Second album from this Black Metal band from Poland. Formed back in 2012, they have just one previous album in their discography. From the name you can guess it is not the usual Black Metal band. If there is something that fits the music in this case, it is the title. Their Black Metal style is quite complex, with a very heavy production and a very important presence of the bass. While the vocals are definitely in the style, they use quite a lot of variation on them. There are times when the band sounds like MAYHEM’s “De Mysteriis Dom Sathanas” and also the vocals at times have a slight reminiscence of Attila’s work. Some spots here and there have a quite progressive approach not far from what EMPEROR did in their first two albums. I also can sense old school Death Metal touches in the early MORBID ANGEL and OBITUARY vein with some touches of old PARADISE LOST. This is the kind of album that every time you listen to it, new things shine. Although the cover art of the Baphomet has been used countless times, do not think this Black Metal band is just one run of the mill. ARCHITECT OF DISEASE is doing a complex, very well elaborated work of Metal drowned deep in darkness and gloominess with very good musicianship and excellent production values. While not exactly fast at all times, they keep a very good up-tempo and many changes to make things interesting to the listener. Definitely to keep an eye on this band. www.facebook.com/architect-of-disease-425689324215174, theendoftimerecords@gmail.com