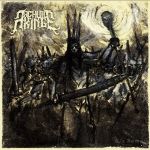 Fast forward to France and the debut album from this one-man band named ARCHVILE KING from Nantes. The band released their first release, an EP entitled “Vile” in 2020 and the four tracks on that one, were enough to convince Les Acteurs De L’Ombre Productions to release a full-length album with the band. The first release is a Black Thrashy feast with a healthy dose of melodic Scandinavian Black Metal intertwined into the short striking songs. The tracks on this album are a tad more varied in length, we go from the a tad shorter than 3 minutes to a tad more than 6 minutes – and strikingly enough it is on the longer songs, where Baurus expresses himself the best. When the atmosphere gets a chance to develop from the first couple of melodic strokes and further on, than the more primitive Black Thrash attack, you get caught by the atmosphere. There is a great deal inspiration from newer DESTRÖYER 666 throughout the album, which isn’t all that bad as ARCHVILE KING has its own take on delivery, though the use of sweeping hitting melodies and grandiose choruses to straight forward malice is strikingly close to the mentioned band. Though Baurus keeps it much more melodic and atmospheric and never straight out brutal – and does never hit the grandiose melancholic feel as the Australians. At first the album sounds quite dull and uninspired, though after some listens it opens and delivers some decent Metal in the vein described above. “À La Ruine” doesn’t hit it totally with me, I miss a spark, some inspiration, some intensity, the atmosphere is somewhat mellow, compared to what I look for, when I am looking for lasting music, I would like to play again and again. Though a reasonable start and there are some solid building blocks to continue with. If you are going to give the album a listen, start with these two splendid tracks: ‘Celui Qui Vouvoie Le Soleil’ and ‘Atroce’! Enter the birth of tragedy: https://archvileking.bandcamp.com, www.facebook.com/ladloproductions