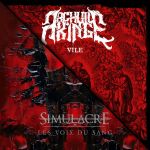 On March 04, 2022, French label Les Acteurs De L’Ombre Productions released the split of SIMULACRE / ARCHVILE KING on CD, vinyl 12” and digital format. The appellative of this creation is the homologous for the bands names. SIMULACRE is a Black Metal band that was formed in 2014 in Bordeaux, France. Having released until now, one EP in 2017 and this split with ARCHVILE KING. With 4 songs, SIMULACRE plays a dissonant Black Metal that only makes the place of origin of this horde more notorious and the evolution that keeps surfacing on the French scene. The opening track is ‘Les Voix Du Sang’, which has no structure at all and the surprises in riffs and blast beats appear with the passing of time. The vocals made me think of Mikko Aspa’s voice and the music reminded me of ESOCTRILIHUM and sometimes BLUT AUS NORD. The second track is ‘Tribus’, where the chaotic rhythmic figures and the speedness are balanced with good melodic arrangements. ‘Time Tombs’ and ‘Myste’ shows us the duality of how a combination of clean vocals and vomits can function as a complement for the other instruments, not taking a protagonism as some voices in Black Metal tend to do. The production of this side is clear and well developed. The guitar, the bass and the drums can be easily distinguished. There is no remorse on me for listening to SIMULACRE. I will keep the trace on them. For the second part of this split, 4 songs of ARCHVILE KING emerge, a one man band that was formed in Nantes, France during the extinguished 2019. ARCHVILE KING has in its discography: one EP, one full-length, one single and this release. ARCHVILE KING creates tunes of a blackened Thrash Speed Metal. These creations of Baurus (the man behind ARCHVILE KING) are soundtracks to procreate the necessity of having some beers, meeting horrible and easy women or only getting drunk in a Saturday night by your own. In ‘The Bastards Of The Sea’ the choir and tunes make the whole song catchy and enjoyable without making it boring. The variety of tempos, the guitar solos, leads and the thrashing drumming is captured in a good and professional production. The clarity of the diverse sounds is there without the loss of aggressivity. ARCHVILE KING’s vocals are harsh and rasp, giving a dirtiness and a narrative to the lyrics that can be comprehend easily. ‘The Feast Of The Worm King’ is the fastest song of ARCHVILE KING’s side, the bass has a more notorious appearence and an acoustic sound pollution appears at the cusp of the track. The length of the track is the essential one, nothing of it is superfluous or listens unnecesary. To me, ‘Gwyneth Paltrow Is A Lich’ and ‘Pax Infernum (Dog Of War)’ are some pieces that are only there to accomplish the required number of songs for the split. I listened to them countless times, having as a result some good laughts and the obligation of searching the silence for the rest of the day. ARCHVILE KING does not present anything new as a band, but Baurus keeps the flame of dirty Black Metal and its roots alive. More info at: www.facebook.com/simulacreband, https://archvileking.bandcamp.com, www.facebook.com/ladloproductions